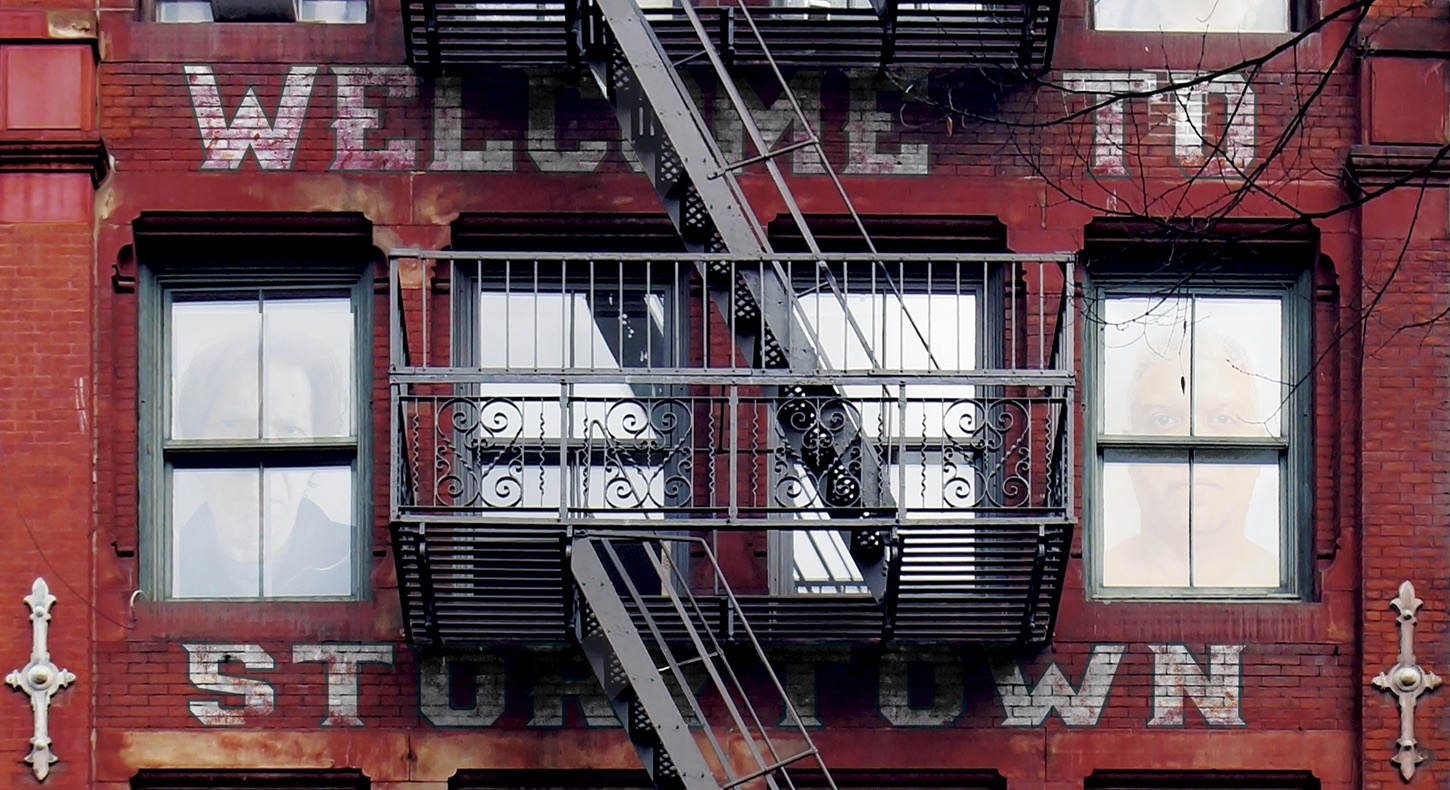 The brainchild of songwriter and guitarist Guy Story, the band’s debut album, Welcome to Storytown—a project 30 years in the making—will be released January 18, 2019.  Backed by bassist Rick Wagner, keyboardist Charly Roth, and drummer Tony Cruz, the twelve original tracks on Welcome to STORYTOWN bring to mind Talking Heads, as well as R.E.M., Old 97s and Alejandro Escovedo among other Southern Rock greats. Deeply embedded in these songs is an innate understanding of how great pop songs work—lyrics that match the emotional heft of the music, perfectly calibrated arrangements in which no sound, no instrumentation, goes to waste. Each song represents an individual journey, both musically and thematically.

In keeping with this sense of place, and reflecting Story’s decades of living in lower Manhattan, the launch event will mix live performances by the band of album tracks with videos, stories, and conversation.  Storytown has invited a number of guest storytellers to share their personal experiences in NY’s music scene over the years.  Featured guests include actress/singer/songwriter Daphne Rubin-Vega, noted music lawyer Elliot Groffman, musician and recording studio owner Al Houghton, and author/musician/journalist Jon Fine.  It’s a variety show of sorts about music in NY, then and now, intimate and personal.

Originally from Jackson, Mississippi, Guy Story spent the better part of the last three decades deeply embedded in the technology industry—working for the likes of Bell Laboratories and Amazon, and as the founding CTO at Audible. Guy had an early footprint in startup culture, digital media, and rights management, all of which have become major touchstones in the current landscape of the music industry. During his time working in technology, his lifetime fascination with music and playing guitar had been squarely relegated to the ranks of hobby, a romantic idea dating back to his early teens that the Mississippi native would revisit periodically over the years but never allow himself to embrace fully.  Now, after ditching his old life in favor of chasing a long-gestating dream, Guy is throwing himself into what it means to be a working musician.  He leads the band Storytown and both wrote and arranged the songs on their debut album, Welcome to Storytown.

Drummer Tony Cruz is originally from “da Bronx” (his words), studied at Berklee College of Music, and has an MAT in Music Education from Lehman College.  He subbed on Broadway for 10 years, playing in, among other things, Hairspray and The Rocky Horror Picture Show.  Tony has toured with the Boston Pops Orchestra and continues as a hired gun in multiple groups and styles, ranging from big band to fusion (to whatever genre you’d pigeonhole Storytown into).  Tony plays with cesium clock accuracy, time-wise, and he does this crazy fast triplet hi-hat thing with a ghost note on the snare that makes you want to play fast shuffles all night long.

Bassist Rick Wagner was raised in a small town in the coal mining region of northeast Pennsylvania.  Rick started playing bass professionally at the age of 16, in “barns, bars, and brothels” (his words :-) throughout northeastern PA.  Rick moved to New York City in 1981 and has played with, among others, The dB's, The Silos, Hearts & Minds, the Paul Collins Band, Ruby On The Vine, the Emily Duff Band, and Alan Paul's Big In China.  A very intuitive and musical bassist, Rick also sings backup, a key ingredient in the Storytown sound.

Fawzia Afzal-Khan is a Professor of Literature and Cultural and Performance Studies with a feminist focus. She has been teaching for over 30 years at Montclair State University and has served as a Visiting Professor at Harvard, at universities in Pakistan and currently at NYU in Abu Dhabi, where she teaches courses in feminisms and Muslim popular culture. She is author of 5 books, including a memoir, and she has directed a short film on Pakistani women singers. She is herself trained in the Pakistani classical “raga” vocal tradition and has performed around the world, including in the US, in a unique fusion style she’s developed with jazz musicians Lewis Porter and Mark Weinstein. She is thrilled to be featured on a song on Storytown’s debut album.

Raised in Brooklyn by a mom who was a concert pianist and an attorney father, Matt Umanov was attracted to taking apart and fixing radios and listening to the eclectic music of Frederic Chopin, Hank Williams and Johnny Mercer. After attending Brooklyn Tech H.S. – and learning guitar repair at the Folklore Center on Sixth Avenue – he was accepted into the engineering program at Northeastern University. But Umanov changed course and, following his real passion, opened a little guitar shop on Bedford Street in the West Village. Sitting amidst the constant change of New York retail,  Matt Umanov Guitars (which moved to Bleecker Street in 1977) survived and thrived for 53 years, until its recent closing in December 2017.  It’s likely that nearly every guitar player on the planet has been in that shop at least once, if not dozens of times.

Born in Panama and raised in New York City, multi-talented Daphne Rubin-Vega is a two-time Tony and Drama Desk nominee and recipient of the Theater World, Obie and Blockbuster awards. She is perhaps best known for the roles she originated, including Mimi ("Rent") and Conchita ("Anna in the Tropics"), both Pulitzer Prize winning Broadway shows for which she was nominated for the Tony award. She has since originated countless other roles, including Dolores in Aaron Mark's urban homage to Sweeney Todd, "Empanada Loca", which has since become the grizzly podcast, "The Horror of Dolores Roach" on Gimlet media, and Beatriz, the undocumented mother in Quiara Alegria Hudes and Erin McKeown's road trip musical, "Miss You Like Hell". Rubin-Vega is recognized for her singing as well. She was a member of the girl group Pajama Party, whose single "Yo No Se" was number one on the Billboard dance charts. In 1997, Rubin-Vega cut her first album of original music, "Souvenirs", on the now defunct Mercury label, and in 2006, she produced, performed, and primarily wrote the album "Redemption Songs".

Long Island native Al Houghton’s Mechanical Engineering degree from Brown University served him well after graduation until his boss told him to fly to Omaha, Nebraska on the night of his band’s gig at CBGB. His subsequent disaffection led him to form Dubway Studios, first opened in the infamous Music Building, across from the Port Authority Bus Station in the mid-eighties. Word quickly spread about the lone engineer in a tiny studio who conjured up amazing sounds using only one blown speaker and a beat-up four-track. In the thirty years since, Dubway has become a full-fledged audio production and post facility, recording all music and dialog for Nick Jr.’s acclaimed "Backyardigans" children’s animation as well as music for Patty Smith, Green Day, They Might Be Giants, The Roots, Sia, and Cat Power.  And as musician, Al keeps his hand in as guitarist for the band Life in a Blender.

Jon Fine is the executive director of editorial for Inc. magazine and Inc.com. Before that, he was the media columnist for BusinessWeek, for which he won American Society of Business Publication Editors and National Headliner Awards. His memoir of his long-running alternate life as a musician, Your Band Sucks, was published by Penguin and won widespread critical acclaim from outlets ranging from the New York Times to The Atlantic to the Philippine Star. (A reviewer on Amazon noted “I imagine, in a small van, Jon Fine is very hard to take.”)  His writing has also appeared in GQ, Vanity Fair, and the Atlantic, among many others, and his work for Food & Wine won a James Beard Award in 2010.  As a guitarist – in Bitch Magnet, Coptic Light and Don Caballero, among others – he has performed in fifteen countries, on three continents, and appeared on MTV. He graduated from Oberlin College, and lives in Manhattan with his wife. The ravages of time have severely eroded many of Fine¹s most dearly held aesthetic and philosophical tenets, but he remains reasonably certain that he adores Black Sabbath¹s first six albums and dislikes most pop music.

Elliot Groffman is a member of Carroll Guido Groffman Cohen Bar & Karalian, a firm specializing in the representation of artists and entrepreneurs in the entertainment industry. Elliot’s personal clients include Dave Matthews Band, Pearl Jam, Brandi Carlile, Tiesto and Nashville-based artists Eric Church and Sturgill Simpson.  The firm represents a wide array of entrepreneurs, including independent record labels such as The Beggars Group (including XL Records), Mom & Pop and ATO Records, independent music publishers such as Big Deal Music, and concert promoters such as Bowery Presents and the promoters of festivals such as Bonnaroo, Primavera Sound and Outside Lands.  Elliot serves as music counsel to Lin-Manuel Miranda, Pasek and Paul of Dear Evan Hansen fame and handles musical theater projects for several music clients including David Byrne, Rosanne Cash and Phish’s Trey Anastasio.