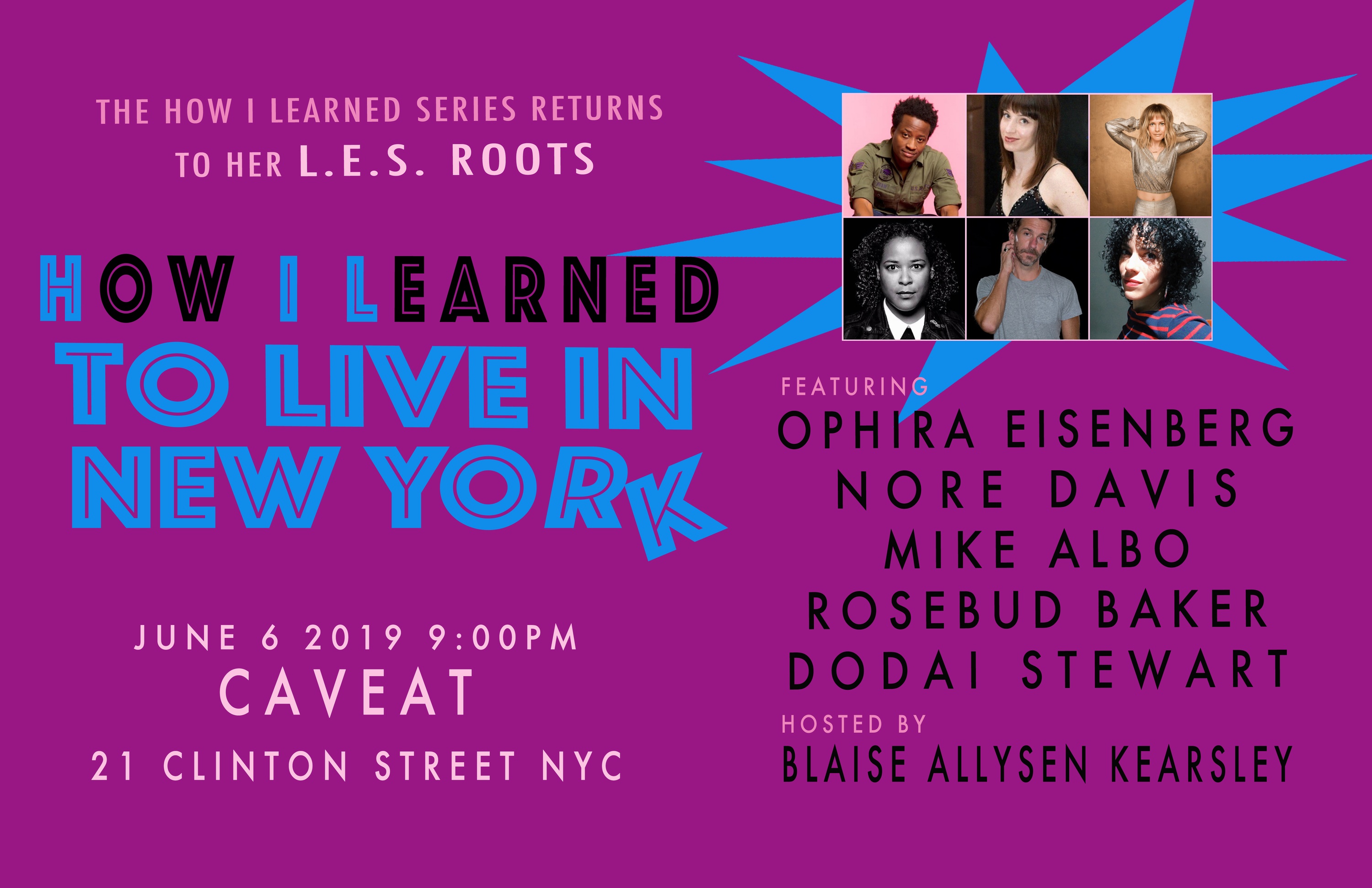 How I Learned is the original oh shit show. Born on the Lower East Side in 2009 when we were young and pretty, it's still the best thing for you right now. The How I Learned Series Presents How I Learned To Live in New York (Vol. 2) Since 2009, How I Learned has featured some of the best live storytelling, comedy, and readings in New York City. It all happens a couple of times a year, and sometimes more than that, which basically means you'll have the best night of you life on those nights, repeatedly.

Doors 9:00 PM, show 9:30 PM.
Tickets $6 in advance, $10 at the door.
21+
This event is mixed seated and standing room. Seats are first-come, first-served.
REFUND POLICY: Tickets may be refunded up to 24 hours before the event. Within 24 hours we may take exchanges for other events at our discretion. No refunds after the event.

DODAI STEWART, who pretty much coined the name "Girlhattan," is the ultimate New Yorker. She is also the deputy editor of The New York Times Metro section, and was one of the founding editors of Jezebel.com. She was also director of culture coverage for Fusion, and editor in chief of Splinter. She has hosted and moderated talks with Roxanne Gay, RZA, Tina Brown, Sascha Jenkins, and Rebecca Traister, and has written for The Washington Post, Glamour, New York Magazine—and, of course, The New York Times.

MIKE ALBO is a writer, storyteller, comedian, humorist, dancer, actor, and person made of stars. He was the Critical Shopper columnist for The New York Times' Styles section, and has had columns in BlackBook, Cargo, Heeb, and Out. He has also written for The New Yorker, W Magazine, New York Magazine, GQ, Elle Decor, Country Living, Details, and many others. He is the author of the novels Hornito and The Underminer, and the novella The Junket. He has served as host and emcee of events for Yaddo, PEN World Voices Literary Festival, La MaMa, and VisualAIDS. He performs regularly at Joe's Pub as one-third of the comedy troupe Unitard, and is one of the founding members of The Dazzle Dancers.

NORE DAVIS is a standup comedian and actor who has appeared on CONAN, Inside Amy Schumer, Last Week Tonight, College Humor, and Sasheer Zamata's monthly show Party Time, as well as HBO's Boardwalk Empire. He is currently developing his own show with Comedy Central called In Between with Nore Davis. Nore has released two comedy albums, Home Game and Too Woke. This is his first appearance at How I Learned.

ROSEBUD BAKER is a comedian, actress, and writer. She was recently selected as "New Face of Comedy" at Montreal's prestigious Just For Laughs Comedy Festival 2018. Rosebud's intensely personal, remorselessly dark brand of humor stood out to viewers in the Amazon Video docuseries, "Inside Jokes" which premiered in November 2018. Since then, she has opened for some of the biggest names in comedy, including Michael Che, Colin Jost, and Amy Schumer. She is one of the few New Faces of Comedy from 2018 slated to perform at Comedy Central's Clusterfest in 2019, and will be appearing in the networks new standup series presented by Bill Burr in 2020. Rosebud co-hosts the weekly podcast, "Two Less Lonely Girls" with Corinne Fisher (Guys We F*cked Podcast) available on iTunes and Spotify.

BLAISE ALLYSEN KEARSLEY is a Brooklyn-based writer and storyteller, and the creator, producer, and host of the How I Learned Series. She has told stories at The Moth, RISK!, Mortified, The Liar Show, Literary Death Match, and elsewhere. Her writing has appeared in The Nervous Breakdown, Midnight Breakfast, The Weeklings, VICE, two anthologies, and several other places many lifetimes ago that are perhaps not worth mentioning by name. She teaches memoir writing to grownups unless she's been fired by now, and one time she was awarded a month-long writing fellowship in Vermont where she got electrocuted and maybe almost killed a horse. To find out how to say all three of her names, visit her outdated website at your own risk.

HOW I LEARNED is the original oh shit show of New York storytelling, comedy, and readings, featuring seasoned and emerging raconteurs holding forth on a rotating theme. The show has been named one of "Five Best NYC Storytelling Shows" by Time Out New York and CBS New York calls it one of the "Best Comedy Shows Hosted by Women." The series has also been written up in The New York Times, The Observer, Electric Literature, Brooklyn Magazine, Tin House, Village Voice, The L Magazine, Brokelyn, Splitsider, and elsewhere. Born on the Lower East Side in 2009, the show takes place a few times a year, and sometimes more than that, which basically means you'll have the best night of your life on those nights, repeatedly.