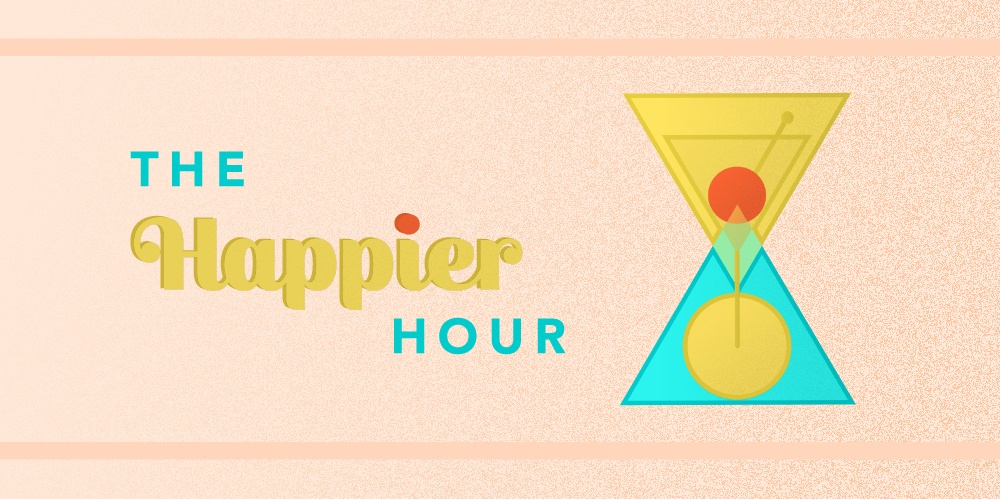 “If you would be a real seeker after truth, it is necessary that at least once in your life you doubt, as far as possible, all things.” ― René Descartes

Our society celebrates certainty, but whatis the value of doubt? How can a healthy dose of
skepticism help us in our everyday #blessed lives? This month we’ll discover how science and philosophy help us live better via doubt.

The Happier Hour is a monthly event series bringing philosophy out of the ivory tower of academia and into our modern day agora: the bar. Each show features a philosophy professor and a philosophic-ish expert.  It’s like the self-help section– only way funnier, smarter, and with booze. And now it’s a podcast too! TheHappierHour.org/podcast #thehappierhour

Doors 3:30 PM, show 4:00 PM.
Tickets $15 in advance, $20 at the door.
21+
This event is mixed seated and standing room. Seats are first-come, first-served.
REFUND POLICY: Tickets maybe be refunded up to 24 hours before the event. Within 24 hours we may take exchanges for other events at our discretion. No refunds after the event.

Monica McCarthy is the creator and host of the live event and podcast, The Happier Hour: Philosophy To Help Life Suck Less. She is also the founder of  Cheshire Parlour, a communications consulting agency bringing meaningful dialogues to communities including The School of Life, Holstee, Impact Hub, 92Y, and Escape The City, where she has curated and facilitated hundreds of events focused on purpose and interdisciplinary connections. Monica is also an actress, and has performed on Broadway and in television and film, from from NYC to LA to Japan to the UK. Speaking of travel, Monica's passport is never far away. So far her travels have taken her to about 50 countries on 6 continents and counting. But she still has zero sense of direction. @MissMMcCarthy

Maryam Zaringhalam is a molecular biologist who traded in her pipettes for the world of science policy and advocacy after receiving her PhD from The Rockefeller University. She is currently based in Washington, DC where she is an AAAS Science & Technology Policy Fellow, producer for The Story Collider, and a leadership member of 500 Women Scientists. Her words have appeared in Slate, Scientific American, and Quartz. Her cat is named Tesla, after Nikola and not Elon Musk's car. For insights like this and more, follow her on Twitter @webmz_

Nickolas Pappas is a Professor of Philosophy at the Graduate Center and City College of CUNY. He has been at CUNY since 1993. His research is mainly in ancient philosophy and the philosophy of art, subjects in which he has written numerous articles. His books include The Philosophical Guidebook to Plato's Republic (now in its third edition) and most recently The Philosopher's New Clothes, both published by Routledge.