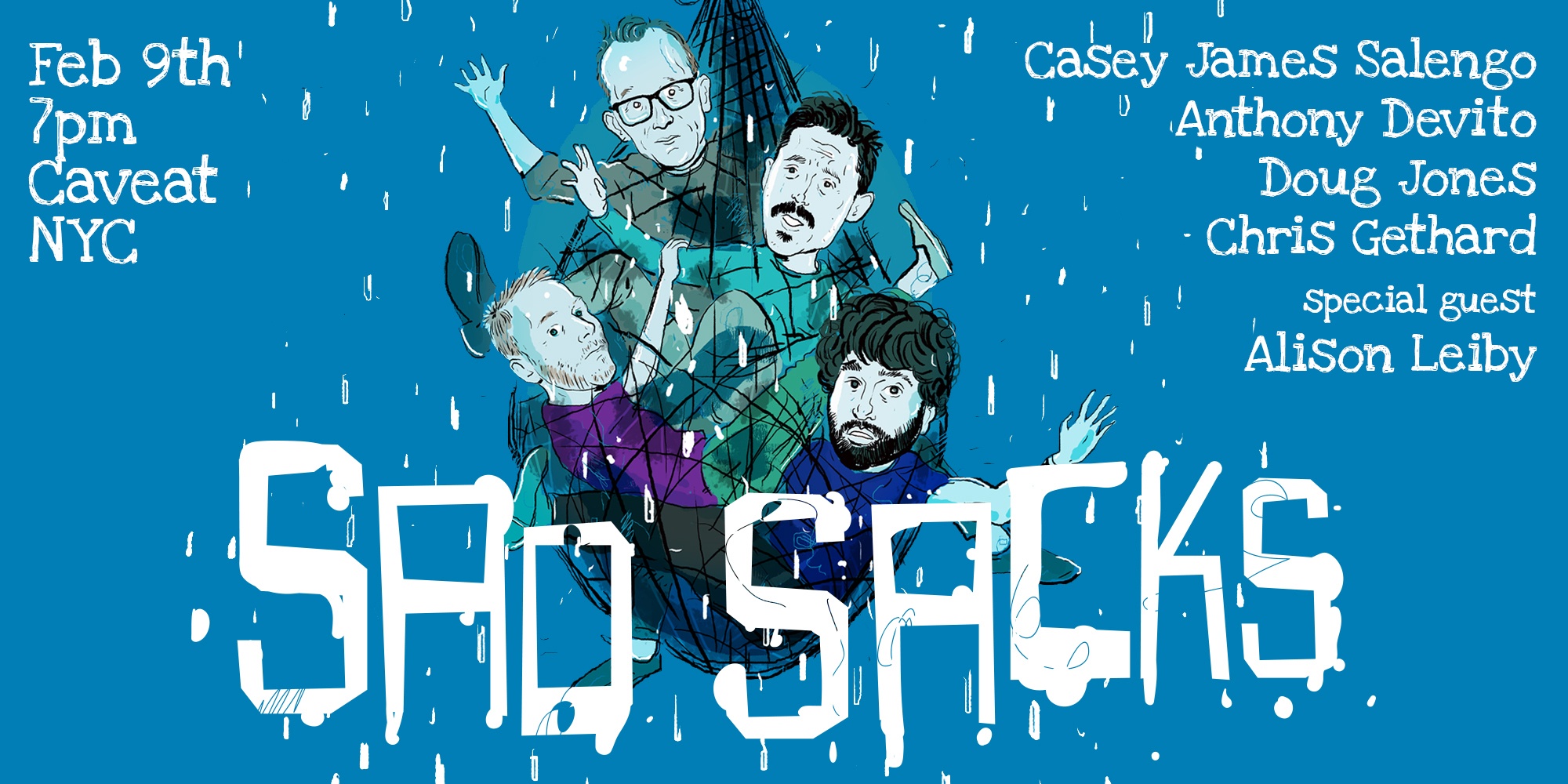 Putting a solo show together inside the typical setting of a comedy club is nearly impossible. There are somber and sincere elements which don't match the tone of two people arguing over chicken fingers. With this format, each performer will have a chance to test drive honest material in front of an audience who's aware of why they showed up.

With a runtime of approximately 90 minutes, each show will feature a guest host to warm up the crowd with 10 minutes of standup before Chris, Casey, Anthony, and Doug take their turn on stage, each performing for 20 mins. In the event one of the fellas is unable to attend, they will pull from their roster of substitutes who are also testing long form personal material.

Sad Sacks is a chance to see multiple solo shows come to life in a single evening, all for one ticket price.

Chris Gethard: A comedian, actor, author, and podcaster. He's known for the podcast Beautiful/Anonymous, the cult public access show The Chris Gethard Show, the HBO special Career Suicide, and appearances in tv shows and movies like The Office, Broad City, Space Force, Don't Think Twice, The Other Guys, Anchorman 2, and a bunch more. He's authored three books, appeared on This American Life, and currently hosts another podcast called New Jersey Is The World about his home state.

Casey James Salengo: A comedian, actor, and writer who has appeared on Comedy Central Presents, Jimmy Kimmel Live, and This Week at the Cellar. He has an album on Comedy Central Records titled “Wild Country Phoenix,” he’s the writer and lead of the Comedy Central web series “Casey Tries His Best,” and is currently running his first one man show titled “In Bloom.”

Anthony DeVito: Originally from New Jersey, his stand up has been featured on CBS The Late Show with Stephen Colbert, Comedy Central Stand Up Presents: Anthony DeVito, Comedy Central's Adam Devine's House Party, and was one of the “New Faces” at the 2012 Montreal Just for Laughs Festival. In addition to stand-up, he's been featured on This American Life, was a writer on Netflix's The Break with Michelle Wolf, and the 2018 White House Correspondents Dinner.

Doug Smith: He’s appeared on CONAN, The Late Late Show with James Corden, and This Is Not Happening on Comedy Central. He also starred in the Comedy Central mini-mock “Brooklyn Ball Barbers”, which has since become their most-viewed-video of all time. Doug has been featured at numerous comedy festivals including Oddball, Bridgetown, and Just for Laughs and his debut standup album, “Barely Regal”, is available now on 800 Pound Gorilla Records.

Alison Leiby: Alison Leiby is a comedian and writer. She wrote for The Marvelous Mrs. Maisel, The President Show, The Opposition, and many others. She has been seen on Comedy Central and opening for Ilana Glazer on tour.