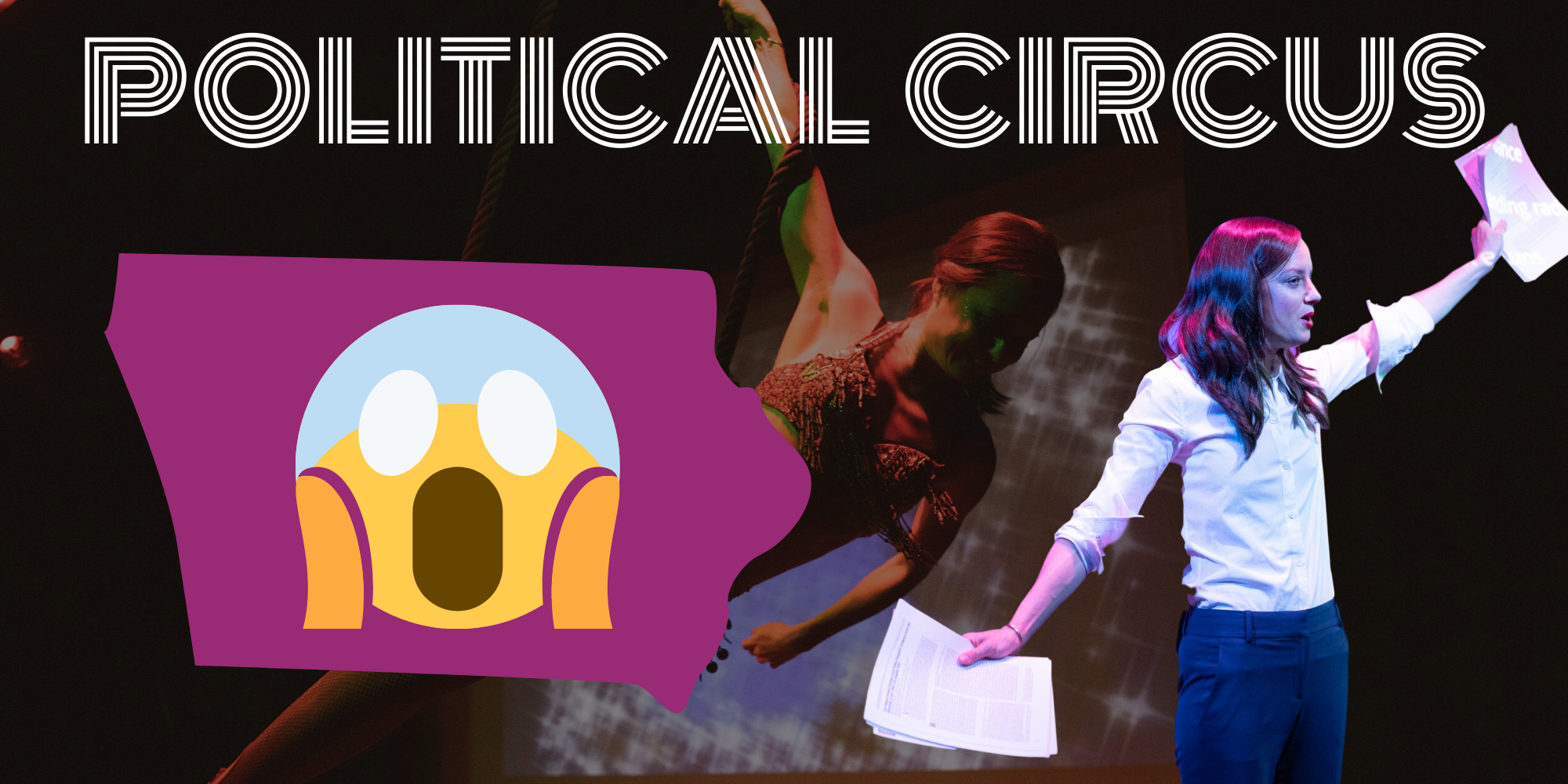 Well, the first stage in the 2020 primary elections took place and it was ... interesting. And, it's left us with lots of questions, like:

In this show, Andrea Jones-Rooy, Ph.D., a political science professor, standup comedian, and circus performer is joined by an all-star cast of politics & technology experts to break down what happened, why it happened, and what it means for the 2020 election -- and heck, democracy itself.

This is a very special additional edition of the otherwise monthly Caveat Original, Political Circus. Read about the rest of the series here!

Doors 6:30 PM, show 7:00 PM.
Tickets $15 in advance, $20 at the door.
21+
This event is mixed seated and standing room. Seats are first-come, first-served.
No outside food or drink is allowed. See our menu here
REFUND POLICY: Tickets may be refunded up to 24 hours before the event. Within 24 hours we may take exchanges for other events at our discretion. No refunds after the event.

About your host: Andrea Jones-Rooy holds a Ph.D. in political science from the University of Michigan, a bunch of low self-esteem from years of doing standup comedy, and a series of physical injuries from decades of being a dancer and circus performer. She wields all these confusingly unrelated things at once in her monthly show at Caveat: Political Circus. When she's not doing that, she's the Director of Undergraduate Studies at NYU and the professor of their flagship course, Data Science for Everyone. She also consults and speaks with organizations about social & data science and previously contributed to FiveThirtyEight as a quantitative researcher. This video sums the whole thing up pretty well.

Walt Hickey is a data journalist who writes about culture, news, and elections. He's the founder of Numlock News, a quick-witted daily morning newsletter all about fascinating numbers behind the news, and the senior editor for data at Insider. He lives in Queens.

Shoshana Wodinsky is a Gizmodo tech reporter covering big data and the trouble it entails. Previously, she was a tech reporter for Adweek covering the way money flows through major social platforms.

Chandler Dean is a speechwriter and comedian based in New York City. He’s an Associate with West Wing Writers, where he has written for celebrities, media personalities, and high-profile politicians. Outside of work hours, his writing has been featured in McSweeney’s, Reductress, Hard Drive, and at the UCB Theatre. His YouTube channel, ChandlerDeanVideos, has accumulated over 20,000 subscribers and 5 million views. Previously, he interned for The Late Show with Stephen Colbert, Late Night with Seth Meyers, and Full Frontal with Samantha Bee. He can’t get you tickets.

Dhrumil Mehta is a Democracy and Technology fellow at the Ash Center for Democratic Governance and Innovation at the Harvard Kennedy School and a Database Journalist at FiveThirtyEight. He builds and maintains databases and writes and reports on issues around elections and politics. Dhrumil holds a Master’s degree in Computer Science from Northwestern University where he focused on artificial intelligence and natural language processing. His research focused on understanding political environments by computationally studying political rhetoric. He was previously a Software Engineer at Amazon and an intern with the Mediacloud project at the Berkman Center for Internet and Society at Harvard as well as a student fellow at the Knight Lab for Media Innovation at Northwestern.