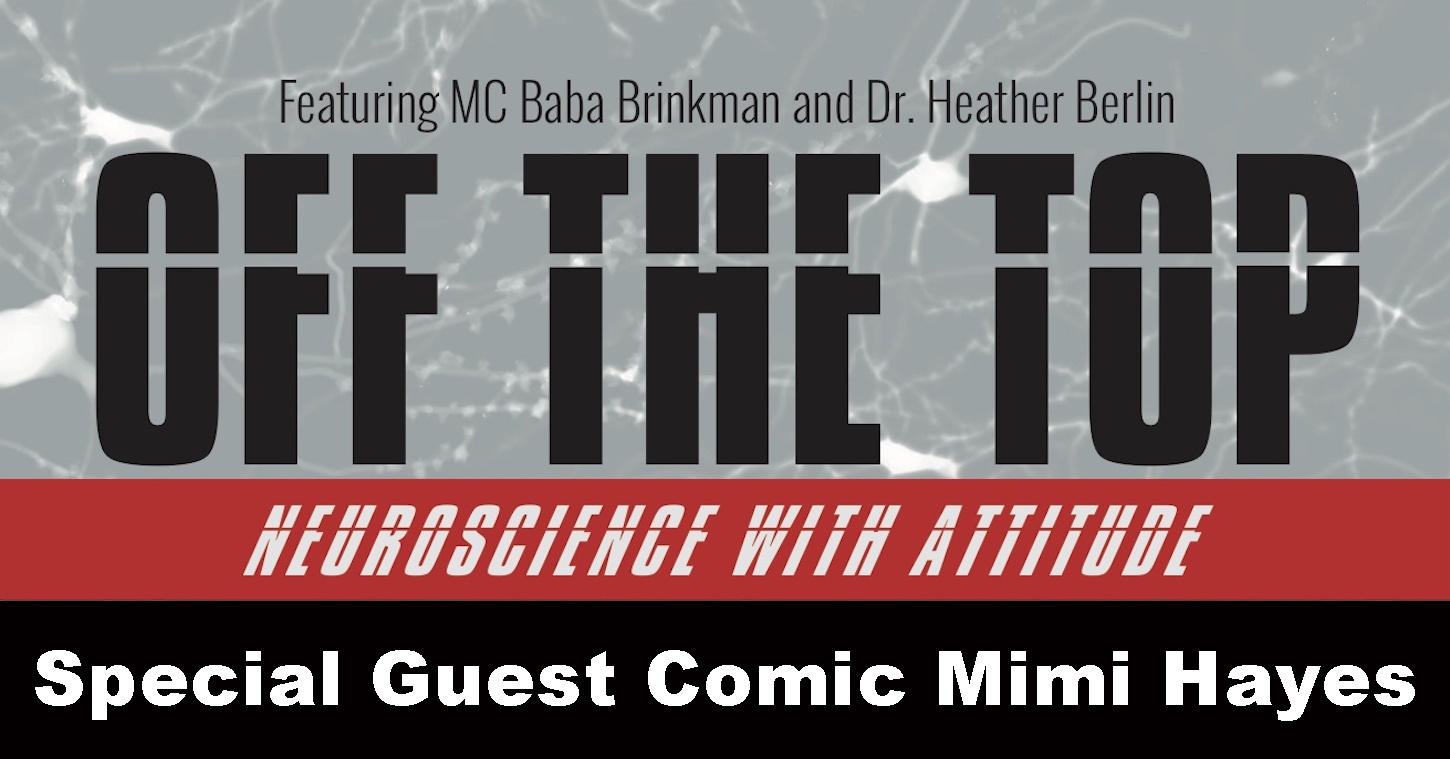 What do a neurologist, a rapper, and a comedian have in common? They're all crazy about brains! Join Star Talk Radio's Dr. Heather Berlin, world-touring rapper Baba Brinkman, and unlikely comedian Mimi Hayes on their quest to understand the complex features of the brain, why they stop functioning sometimes, and at the very least have a few laughs about it.

Doors 9:00 PM, show 9:30 PM.
Tickets $12 in advance, $15 at the door.
21+
This event is mixed seated and standing room. Seats are first-come, first-served.
REFUND POLICY: Tickets maybe be refunded up to 24 hours before the event. Within 24 hours we may take exchanges for other events at our discretion. No refunds after the event.

A married couple in real life, Baba and Heather bring you the latest research on spontaneous creativity while putting their odd-couple relationship under the microscope. Mimi, their real-life friend and occasional nanny, weighs in with her own story of brain malfunction, a cerebral hemorrhage that rocked her twenties and strangely led her to a career in stand up comedy.

Learn how a rapper seduces a scientist, how hard it is to solve a math problem while rapping or with a head injury, and how your subconscious comes to the surface in spontaneous moments. Berlin gives us the science, Hayes brings the brain damage, and Brinkman rolls it all up into a series of seriously impressive freestyles.

Dr. Heather Berlin is a Cognitive Neuroscientist and assistant professor of Psychiatry at the Icahn School of Medicine at Mount Sinai. Passionate about science communication and promoting women in STEM, Berlin is a committee member of the National Academy of Sciences’ Science and Entertainment Exchange, and The New York Times series TimesTalks. She hosts Startalk All-Stars with Neil DeGrasse Tyson, and hosted the PBS series Science Goes to the Movies, and the Discovery Channel series Superhuman Showdown. She has made numerous media appearances including on the BBC, History Channel, Netflix, National Geographic, and TEDx, and was featured in the documentary film Bill Nye: Science Guy. She received her Ph.D. from the University of Oxford and a Master of Public Health from Harvard University.

Baba Brinkman is a rap artist, science communicator, and award-winning playwright based in New York. Best known for his “Rap Guide” series of science-themed plays and albums, Baba has toured the world and enjoyed successful runs at the Edinburgh Fringe Festival and off-Broadway. The series so far includes rap guides to Evolution, Human Nature, Business, Wilderness, Religion, Medicine, Climate Change, and Consciousness. Called “Astonishing and brilliant” by the New York Times, Baba is a Scotsman Fringe First Award winner for Exceptional New Writing, and a two-time Drama Desk Award Nominee, for “Outstanding Solo Performance” and “Unique Theatrical Experience”. He has performed live on MSNBC’s “The Rachel Maddow Show” and shared stages with science luminaries including Stephen Hawking and Bill Nye. Baba is also a winner of the National Center for Science Education’s “Friend of Darwin Award” for his efforts to popularize evolutionary biology.

Mimi Hayes is a New York-based comedian and author of "I'll Be OK, It's Just a Hole in My Head." A former high school teacher and brain injury survivor, Hayes wrote her first humorous memoir while recovering from a traumatic head injury at the age of twenty-two. Her honest take on trauma and love followed her to the stage as a stand-up comedian where she has performed on stages such as Denver Comedy Works, Broadway Comedy Club, Caroline's, Stand Up NY, Dangerfield's, and The Upright Citizen's Brigade. She was highlighted by Mogul as a "New York City Comedian To Look Out For in 2018" and is currently writing a TED Talk, a solo show, and a TV pilot. Catch her newest show "Mimi and The Brain," a comedic neuroscience podcast, available now on all streaming devices.