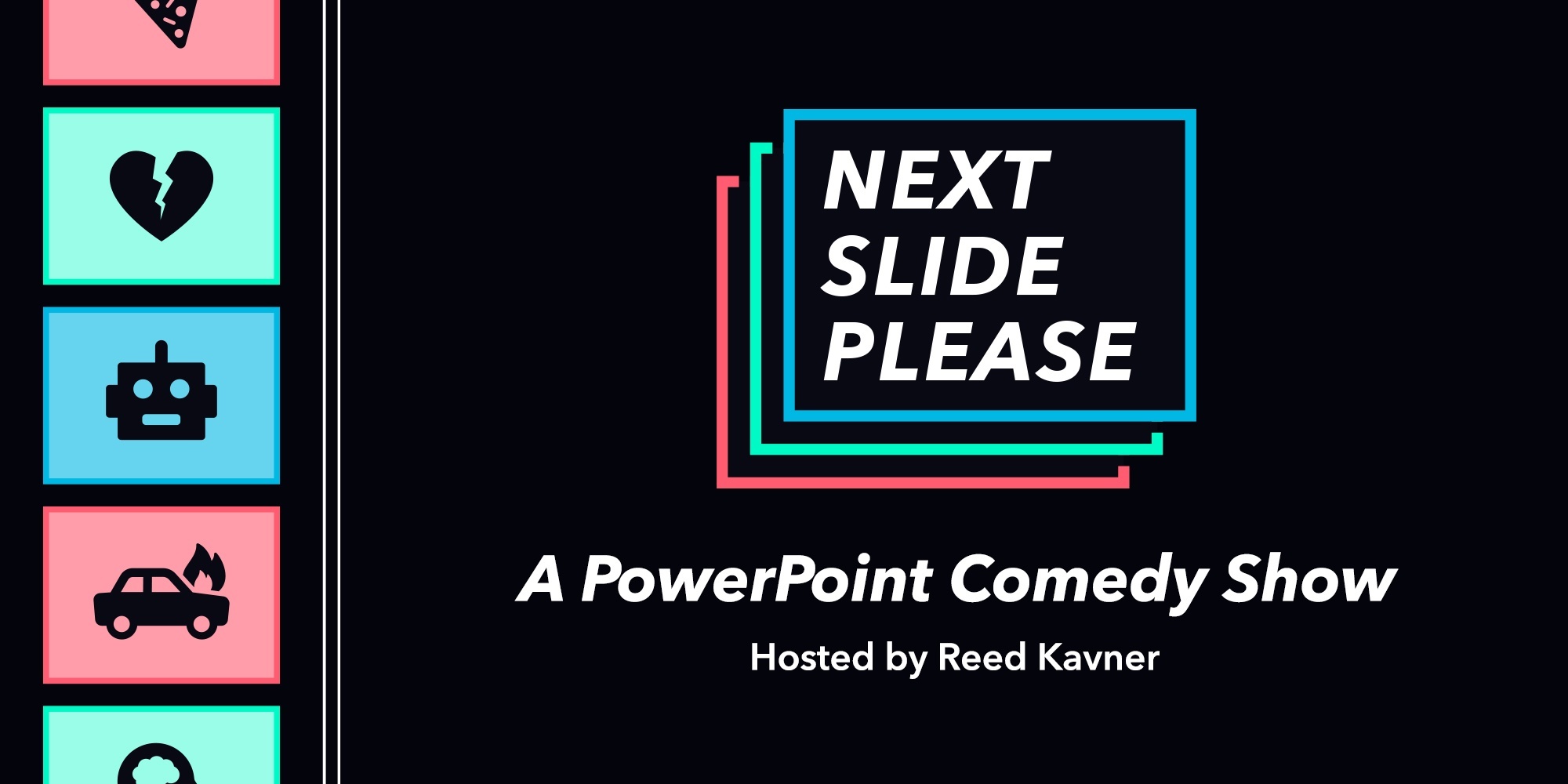 Next Slide Please invites comedians to create and present PowerPoints about whatever they want. That could mean a data-driven ranking of the best Manhattan street corners for first date make-outs, pitches for start-up investment opportunities that are *probably* not scams, or a passionate defense of the 2003 Jessica Alba vehicle "Honey" (21% on Rotten Tomatoes).

Hosted by Reed Kavner and featured in The New York Times and Gothamist, Next Slide Please has been called “more entertaining than your last meeting,” which we admit is a pretty low bar but we’ll take it!

Felipe Torres Medina is an Emmy and Peabody award-winning humorist and writer. Currently on staff at The Late Show with Stephen Colbert, Felipe has also written for The New Yorker, McSweeney’s, and Reductress.

Jamie Linn Watson is an actor and comedian best known as “The Sprintern” on Sprint’s national ad campaigns. Jamie has performed at UCB and with the Story Pirates, and is a member of the comedy collective Lisa, which appears monthly at Union Hall.

Max Wittert is a comedian and illustrator who has created animated shorts for Nickelodeon and Comedy Central. He appeared at Comedy Central’s Clusterfest in 2019 and performed his solo show “Portrait of the Artist Seated With Grapes” at the New York Comedy Festival. This is his third appearance on Next Slide Please, a world record.

Joe Castle Baker is a comedian, actor, and writer featured in the upcoming season of TBS’ Search Party. He has also made appearances on The Other Two and on hit comedy podcasts including Seek Treatment and Las Culturistas.

Ena Da is an actor, comedian, writer, musician, social media content creator, and, according to her LinkedIn, a line cook at Chipotle. She is the creator of the popular and chaotic Instagram meme page @park_slope_arsonist.

Woody Fu is an actor and comedian who was selected as one of the New Faces of Comedy at this year’s Just For Laughs comedy festival. Woody is a member of the musical improv group Baby Wants Candy and has appeared on The Marvelous Mrs. Maisel, Girls 5Eva, and The Last OG.

Reed Kavner is a comedy writer, producer, performer, and computer guy whose work has been featured in The New York Times, Buzzfeed, Gizmodo, and The Verge. He hosts the trivia game show Browser Battle and is the creator of Low Tide, a scripted comedy podcast that was named one of Indiewire’s Best Podcasts of 2020.

More about Next Slide Please at https://nextslide.show