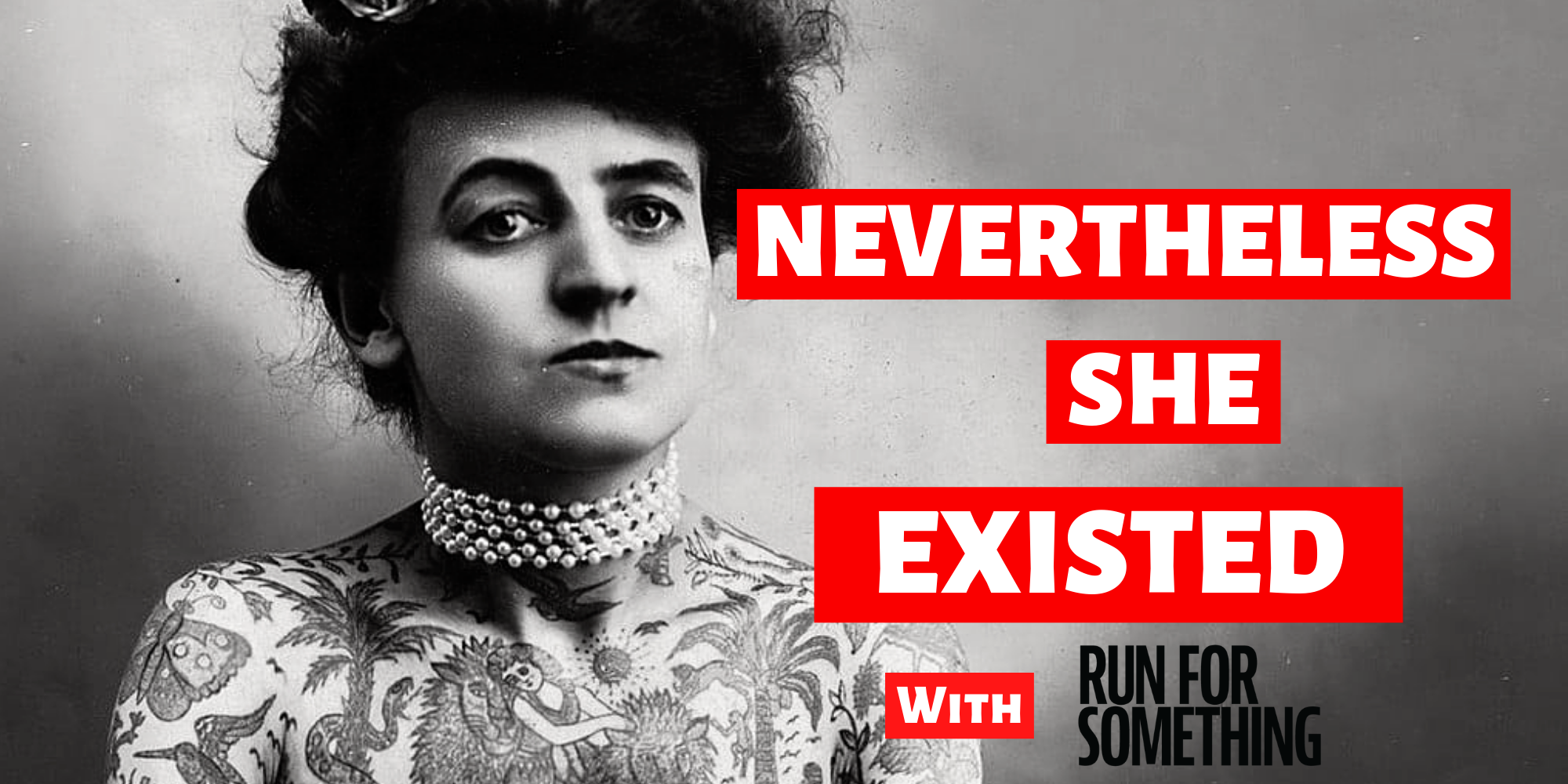 Caveat and the Nevertheless She Existed team are postponing this week’s show. We believe that a fun and distracting show is not the best way to serve our community right now. If you had a ticket you should have an email with further info.

Nevertheless She Existed: the Women They Don't Want You to Know About is the shameless feminist party you've been waiting for. Each month a lineup of female storytellers, comedians, and historians join forces to share the stories of some of the greatest women the world has ever known (but history erased). We're cracking open the history books and throwing in some feminism- one bad bitch at a time.

This Month: She Ran for Your Rights

Happy Primaries! We're celebrating by raising a glass to the female politicians of yore.

In partnership with Run for Something

How will this work?

Going crazy yet? Craving information, but starting to feel desperate to receive it in a non-depressing way? Worried about the state of art and intelligent discussion in the time of social distancing? We got you.

Your favorite nerdy basement bar now hosts livestreams 6 nights a week with extra-special online editions of our long-running shows. Medical advice without any bullsh*t! Wrestlemania-style debates over scientific principles (where you can chime in)! Political science with that ever-needed dash of showmanship! If it’s smart and it’s weird and it’s entertaining, you know we’re gonna give it to you.

It’s a strange time and it may only get stranger. Hopefully some good old fashioned intelligent nightlife can help get you through it - right from the safety of your home.

All ticket proceeds & PayPal contributions go toward paying Caveat’s staff during the shut-down, as well as paying the performers!

Caveat Members get free access to all Caveat Livestreams! Members: use your email address as a promo code! To become a Caveat Member, click here!

Wash your hands and keep calm: Caveat is here to keep our community entertained and our creators working.

About Run for Something:

Run for Something recruits and supports young diverse progressives running for local office. Since launching in 2017, they've identified more than 46,000 young people interested in jumping in to public service. Of those, RFS has endorsed 950+ all-stars and elected 305 people across 45 states -- their successful alumni are 55% women, 47% people of color and 18% LGBTQ. After recruiting potential candidates and helping them get on the ballot, RFS provides training, support, community, and mentorship to folks running in service of building a movement of leaders.

Amanda Litman is the co-founder and executive director of Run for Something, a PAC that recruits and supports young, diverse progressives running for ​local office — since 2017, they’ve elected more than 300 people across the country. She's also the author of “Run for Something: A Real Talk Guide to Fixing the System Yourself,” published by Simon & Schuster in 2017.
Politico named Run for Something (and Amanda) one of the 50 ideas driving politics in 2018. Bloomberg called her one of the people to watch in 2019. Amanda has written for outlets like MTV.com, Buzzfeed, The Nation, Teen Vogue, CNN.com, Vanity Fair, O Magazine, and more.
Before launching Run for Something, she was the email director for Hillary Clinton’s 2016 presidential campaign, digital director for Charlie Crist's 2014 Florida gubernatorial campaign, and an email writer for Barack Obama’s 2012 re-election campaign. She graduated from Northwestern University and lives in Brooklyn.