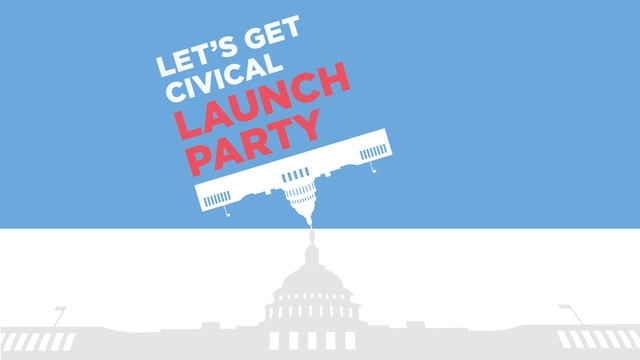 From impeachment to voting rights, Let's Get Civical is a new podcast that dives into the civic lessons we never got in school.

Launching January 30th, 2019, hosts Lizzie Stewart and Arden Walentowski unpack and repack those inaccessible, and archaic, government structures that have driven us to the cry for help we’re in today. This stuff is confusing so we've made it our mission each week to break down how it all works to help you (and us) understand what the FDR is going on. It's like being in American government class with your bffs!

Join us to celebrate the launch of our fun, informative and ridiculous podcast! We'll start off the night with pre-party drinks and a photo op followed by a night of performances from NYC's finest and funniest comedians.You'll be guaranteed an evening full of laughter and maybe learn something you didn't know before about this country works. Or doesn't work.

Lizzie Stewart is an NYC based stand-up comedian. Career highlights include having to follow Jerry Seinfeld, Jim Gaffigan, and George Wallace without having a total meltdown. In 2018, she produced and hosted the benefit comedy show Y'ALL READY (with Aparna Nancherla and Corinne Fisher as headliners) which raised $1,000 for the anti-sexual violence organization RAINN. Last summer, she was invited to perform in the Burbank Comedy Festival as a Producer's Pick. For more updates on where she's currently crying, you can follow her at: Twitter @lizziestewart16 / IG: @Lizzie_the_rock_stewart

Arden Walentowski is a campaign staffer, political strategist, and blogger. Primarily based in NYC, she has worked in the Office of U.S. Senator Kirsten Gillibrand, was Chief of Staff for the Jonathan Lewis Campaign for Congress and has worked on numerous other city and state races. She is also the co-founder of Three Oracles, a blog about the state of American democracy, which features an all-female writing team. For insights and jaded political commentary, check her out at: Twitter @ArdenJulianna / IG @arden_jay