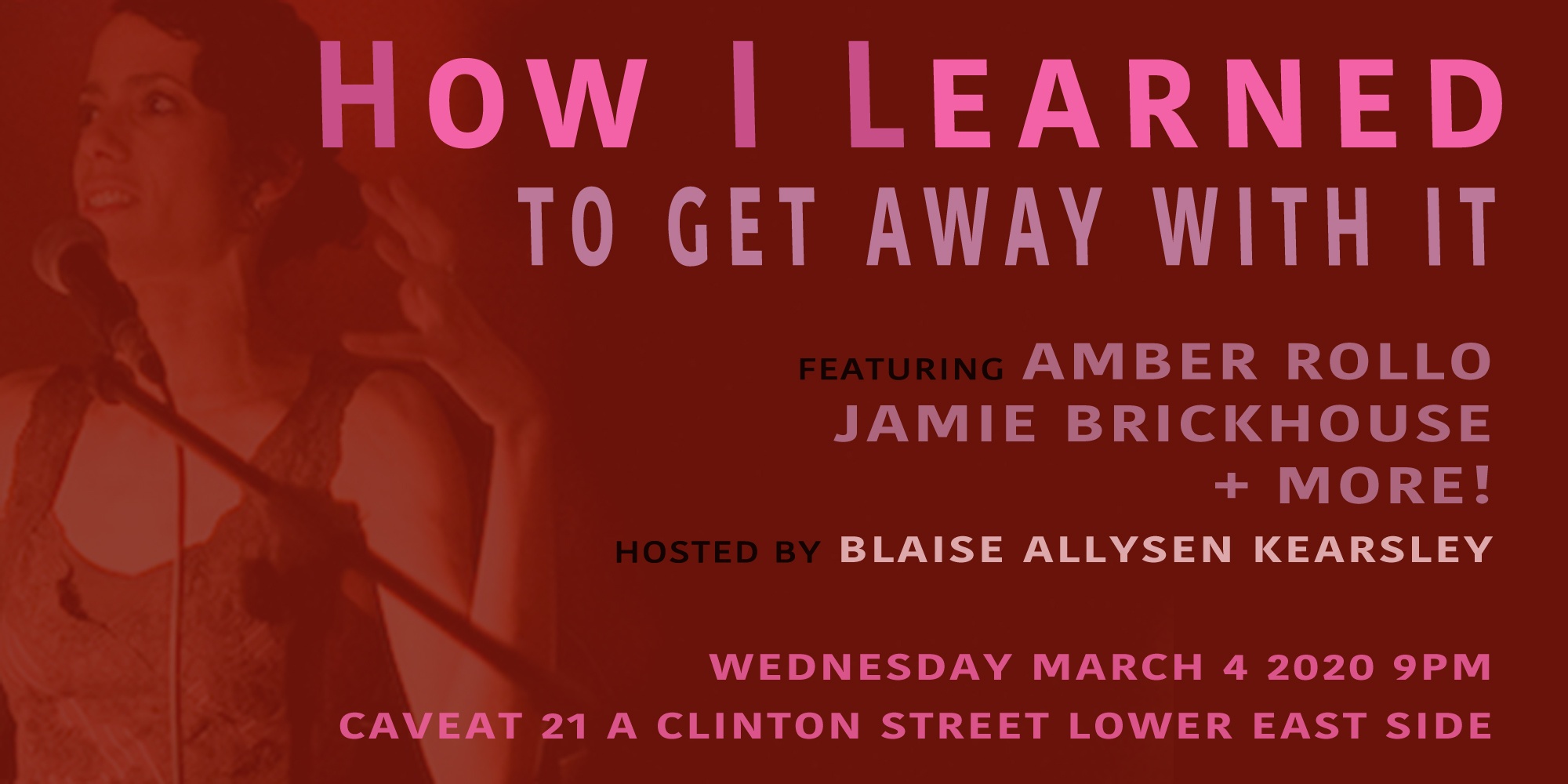 How I Learned: To Get Away With It

Since 2009, the How I Learned series has featured storytellers, comedians, writers, musicians, and other raconteurs holding forth on a rotating theme. It happens a few times a year — and sometimes more than that —  which basically means you'll have the best night of your life on those nights, repeatedly.

AMBER ROLLO is a writer and comedian who has headlined the New York Comedy Festival and co-hosts the monthly show Stoked Comedy. She recently earned the title "Downright Rude" when she confronted Harvey Weinstein who showed up in the audience at a downtown variety show. Her writing has appeared in Ms. Magazine, Refinery29, and elsewhere.

JAMIE BRICKHOUSE is a four-time Moth StorySLAM winner and the author of the acclaimed memoir Dangerous When Wet, hailed by Mary Karr as "required reading." His work has also appeared in The New York Times, The Washington Post, Salon, and Out, and has been a regular guest on Risk, Story Collider, and Literary Death Match.

SADY DOYLE is the author of Trainwreck: The Women We Love to Hate, Mock, and Fear... and Why. The Atlantic predicted that "Trainwreck will very likely join the feminist canon." While waiting to join the feminist canon, to which she will bring a basket of muffins, Sady has also wrote the book Dead Blondes and Bad Mothers. Her other writing has appeared in The Guardian, The Atlantic, The Awl, Buzzfeed, Rookie, Slate, Elle, and all across the Internet. She is also the founder of the blog Tiger Beatdown.

ABBI CRUTCHFIELD is a comedian, writer and acto. A UCB alum, she produces the live comedy hour "The Living Room Show" in Brooklyn. She has been featured on Comedy Central, VH1, CollegeHumor, truTV, NBC, VH1, MTV and in national commercials. She tours as a stand-up with the group Pink Collar Tour and improvises with the ethnically diverse indie team Nobody's Token.

MIKE BROWN co-produces the critically acclaimed shows Super Video Bros., The Feel Good Show, and Comedy Outliers. He has appeared on Adult Swim and San Francisco Sketch Fest where he was named one of Rooftop's Comics To Watch. He is the creator and star of the popular web series, Can't Stop, Won't Stop.

BLAISE ALLYSEN KEARSLEY is the creator, producer, and host of the How I Learned series, which has been called one of NYC's Best Storytelling Shows by Time Out NY, and CBS New York named it one of the Five Best NYC Comedy Shows Hosted By Women. They also called her "awkwardly funny." She has appeared on The Moth, Risk, Story Collider, Mortified, and Literary Death Match. Her writing has been featured  in Longreads, Midnight Breakfast, VICE, The Weeklings, The Nervous Breakdown, two anthologies, and several other places a long time ago, that don't even exist anymore, and are perhaps not worth mentioning by name.

SASS Presents: A History of Frivolity

Ask a Political Scientist: Just How Bad is Social Media for Demoncracy

Asians: The Emotional Sluts of America