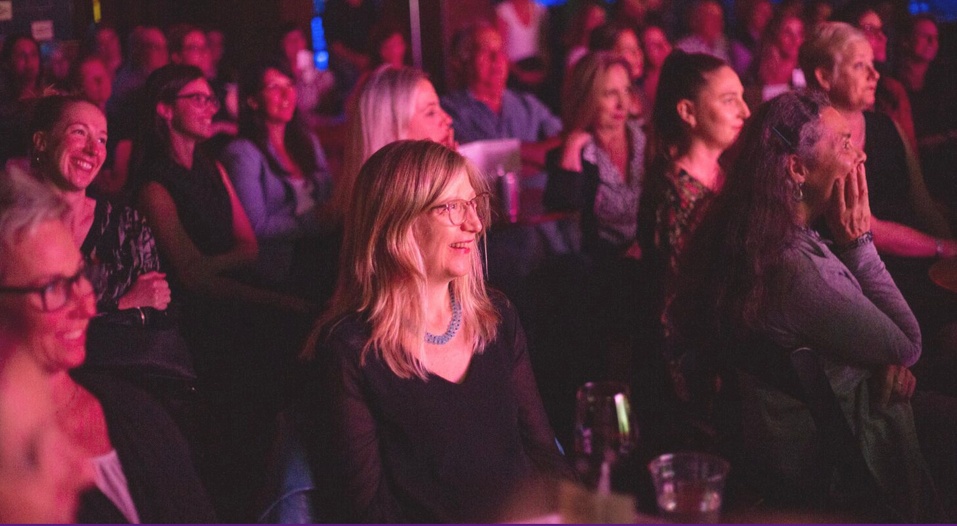 Thank you so much for supporting Funny Over Fifty and Caveat by purchasing a ticket to the show. If you’d like to make an additional donation to Caveat, you can follow this link:

Tired of feeling stressed out? We're here to make you smile. Funny over Fifty is bringing you some of the funniest women in New York City, who just happen to be over the age of fifty! Age has nothing to do with the ability to tickle the ol’ funny bone—you won’t want to miss this unique virtual evening of stand-up and humorous storytelling from the city’s best and brightest.

Mina Hartong’s career has taken her from NYC’s public schools to East Africa to Theater Programs for the Incarcerated in Connecticut. When not in the classroom, Mina performs stand up on national stages.

Carla Katz has performed widely in NYC, including at the Comedy Cellar and Caveat, and is a Moth StorySLAM Champion. She co-produces the On the Waterfront Storytelling show.

Donna Lewis has performed in comedy clubs in LA, New Orleans, Boston and NYC. She’s been in comedy festivals, commercials, and performs sketch and improv at the Push Comedy Theatre of Norfolk, VA.

Karen Williams is the founder of the International Institute of Humor and Healing Arts, the go-to resource for humor education programs. She currently teaches comedy classes at the new LGBT Community Center of Greater Cleveland.

Going crazy yet? Craving information, but starting to feel desperate to receive it in a non-depressing way? Worried about the state of art and intelligent discussion in the time of social distancing? We got you.
Your favorite nerdy basement bar now hosts livestreams 6 nights a week with extra-special online editions of our long-running shows. Medical advice without any bullsh*t! Wrestlemania-style debates over scientific principles (where you can chime in)! Political science with that ever-needed dash of showmanship! If it’s smart and it’s weird and it’s entertaining, you know we’re gonna give it to you.
It’s a strange time and it may only get stranger. Hopefully some good old fashioned intelligent nightlife can help get you through it - right from the safety of your home.
All ticket proceeds & PayPal contributions go toward paying Caveat’s staff during the shut-down, as well as paying the performers!

Caveat Members get free access to all Caveat Livestreams! Members: use your email address as a promo code! To become a Caveat Member, click here!

Wash your hands and keep calm: Caveat is here to keep our community entertained and our creators working.