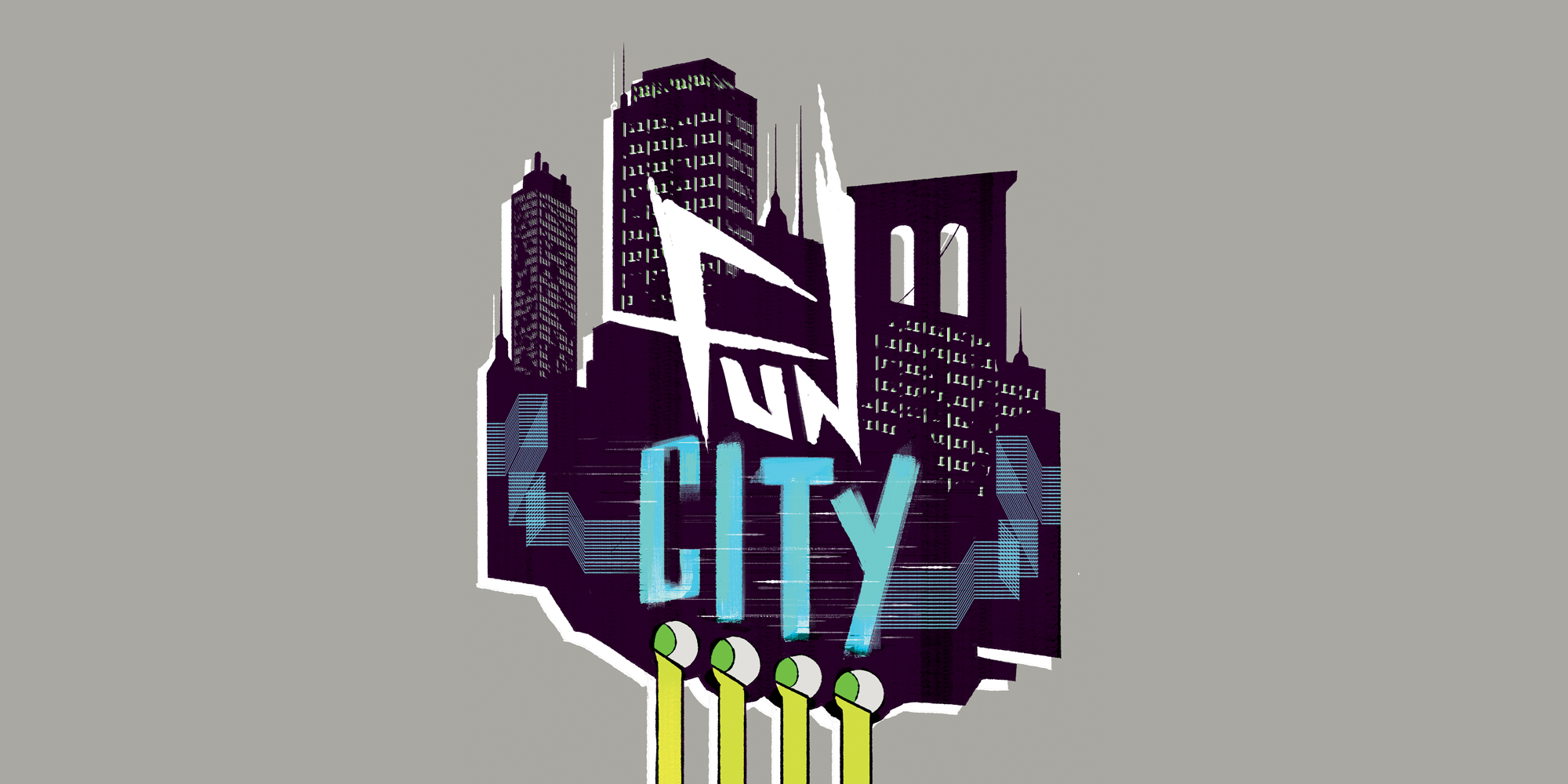 The cast of Fun City plays a one-off tabletop RPG game live, set in New York City in the year 2101! Join Bijan, Jenn, Nick, Shannon, Taylor and Mike of the podcast Fun City in Rebuilt New York for an evening of heisting, fast talking, hacking, spell casting and general running-in-the-shadows. No previous knowledge of the show, or tabletop games, is necessary - but if you want to know more, head to http://funcity.ventures

Jenn de la Vega is a community-oriented caterer based in Brooklyn, NY. She authored and styled Showdown: Comfort Food, Chili & BBQ (Page Street/MacMilllan) and serves as editor at large of Put A Egg On It. Jenn has built a unique culinary practice mashing up experiential with visual art and food through residencies at TASTE Cooking (Penguin-Random House), Babycastles Gallery, and Kickstarter. Her kaleidoscopic recipes appear on Food52, Thrillist, Yummly, and Wine Enthusiast. Currently, she is developing Nicole Taylor’s upcoming Watermelon & Red Birds (Simon & Schuster) as well as ISLAS with Von Diaz (Chronicle). Catch her Twitch talk show Attack the Pantry on Wednesdays at 5pm ET.

Nick is a performer and writer based in Brooklyn, NY. Nick has been performing at the Upright Citizen’s Brigade Theatre since 2014 and can be seen performing at UCB’s premier weekly show, Asssscat 3000. Nick has been featured in videos from Netflix, Comedy Central, Above Average, College Humor, and Funny Or Die that have been covered by Splitsider, AV Club, Huffington Post, Entertainment Weekly, and more

Shannon is a Brooklyn based writer, comedian, and scientist. She co-hosts and produces Drunk Science, an experimental comedy show deemed “a stroke of genius” by Gothamist and a finalist in TruTV’s comedy break out initiative. She co-created, writes, and stars in the Inverse original series”Your Brain on Blank”, where she explains the science behind how everything-from alcohol to caffeine to puppies- affects the brain. She can be seen on “The Science Channel” where she acts as a regular science correspondent for the show, “What on Earth!”. She performs monthly with her improv group MOOF at the Upright Citizen Brigade theater. She can also be seen at Weill Cornell Medicine, where she is a Neuroscience PhD candidate studying epigenetics and memory.

Bijan Stephen is a writer, editor, video correspondent, and podcast host. He’s currently a host and senior editor at Campside Media, a video game columnist at The Believer, and a music critic at The Nation. He streams on his own channel and as a host on Pixel Circus’s weekly show One Time On The Internet. His work has appeared in The New Yorker, The New York Times, GQ, Wired, and elsewhere. Previously he was a staff writer at The Verge, an editor at The New Republic, and a culture correspondent on Vice News Tonight on HBO. He tweets @bijanstephen.

Taylor is a writer, performer, producer. He has been seen on stage at the Upright Citizens Brigade Theater, writing and hosting TruTv’s Sex Your Food, producing podcasts for Splitsider, editor-in-chiefing Fortunate Horse Magazine, and creating the phrase “chill sitch” for which he has won multiple no awards. He is the Emperor for Life of Fortunate Horse, and he plays all the bad guys on the show

Mike is a writer, host and theater artist. He was the creator, host and writer of PBS Digital Studios’ multiple Webby Award winning series Idea Channel, and has hosted and written digital video for Know Your Meme, Crash Course and Mental Floss. He is the creator and host of Reasonably Sound, a podcast about the science and culture of all things audio. Rugnetta has worked as a content, engagement and marketing strategist for PBS, BBC America, The Shed, APM and Cycling ’74. He has worked as a digital producer for The American Chemical Society, Atlas Obscura, Adobe, Company.Co, Duolingo, The Future of Storytelling, and Longreads. He is currently Director of Production at Charts & Leisure.