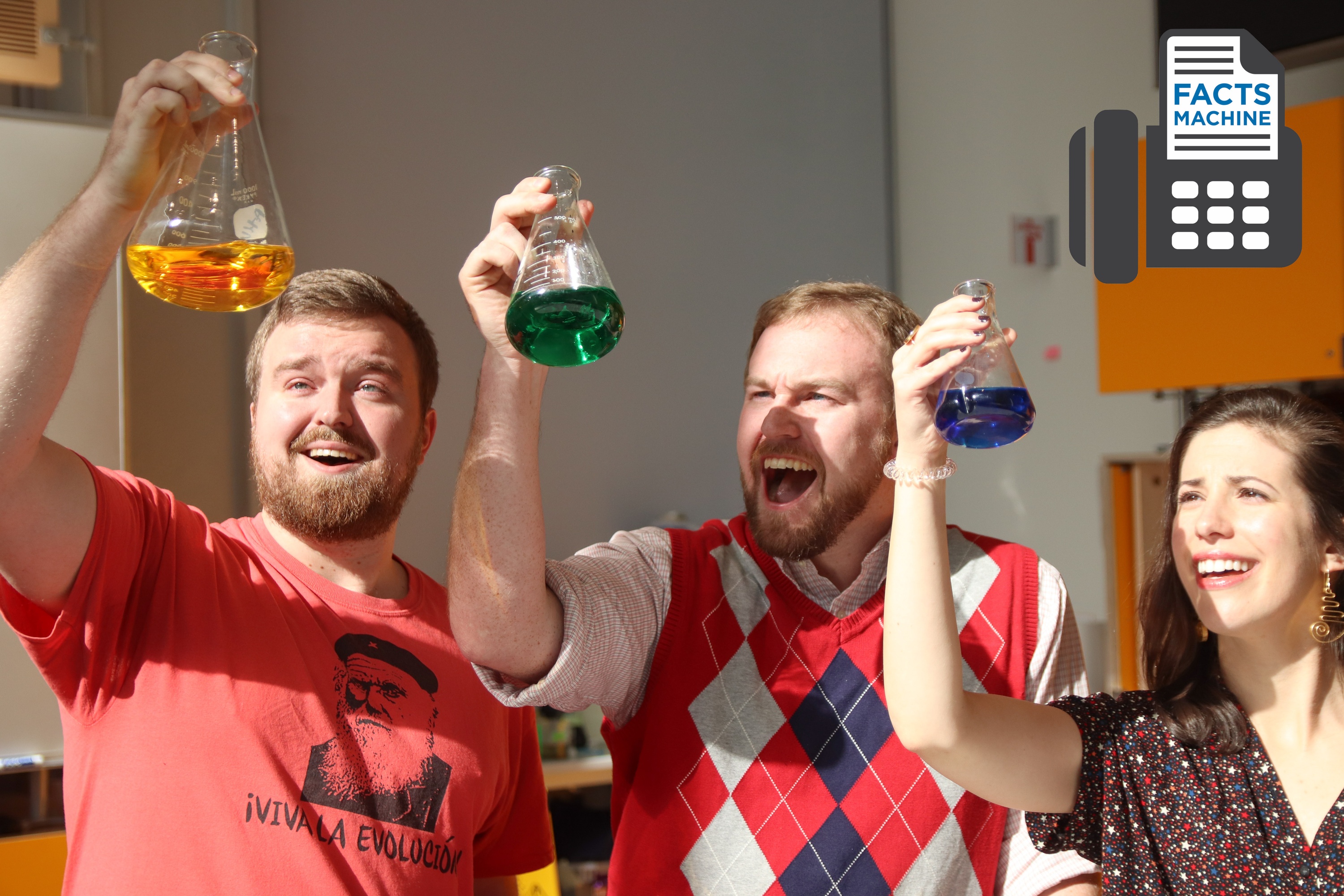 As scientists who moonlight as pub trivia hosts, it’s our job to be curious about interesting questions and to be motivated to search for answers. Accordingly, our podcast asks and answers questions like: Why is the nation of Finland rising out of the ocean? What is the legal definition of a cookie? Why were the Apollo 16 astronauts so gassy? And which animals just really suck? In each episode of Facts Machine we explore questions like these by sharing and discussing three fascinating facts and one pub-style trivia quiz, all loosely inspired by the episode’s theme (and accompanied by more than our fair share of puns along the way).

Co-host Noah Guiberson got his start writing and hosting trivia nights in the rugged pub quiz circuits of Baltimore and New York. A Weill Cornell neuroscientist by day, he seeks to answer the greatest trivia question of them all: How does the brain work? His favorite fact right now is that the people of Paris HATED the Eiffel Tower when it was first built, with one going so far as to call it “a hole-riddled suppository”.

As a research scientist at Memorial Sloan Kettering, co-host Emily Costa’s main focus is hitting chemoresistant lung cancer where it biologically hurts. When she’s not pipetting pink liquids or over-enthusiastically sharing spider facts, you can find her reading, trying recipes that involve immersion blenders, or tending to her ever-expanding family of houseplants.

Co-host Dr. Rob Frawley, PhD is an alumnus of Weill Cornell Graduate School where he studied orthopedics and cell biology. A long-time NYC Trivia Host, Rob now works with BioBus Inc. delivering science to schools all over New York City with a bus full of microscopes, amazing samples, and funny games. Rob spends the rest of his time swimming and waiting for it to be Pi Day.

Special Guest Dr. Rich Fisler, PhD teaches high school physics and computer science, though his scientific origins are in biomedical engineering. He recently renovated and moved into an 18th century Connecticut farmhouse, where he makes tomato sauce and maple syrup, gardens, and plays guitar and harmonica. As his friends from college would tell you, he also has a talent for identifying Star Trek episodes within as little as 2 minutes of watching.

Producer A.C. Antonelli always dreamed of becoming a professional skateboarder who plays for the New York Rangers and is a rally car driver and musician and owns a brewery and also is Batman. Most of this did not pan out, so he became a scientist. He now studies the use of BCG as an immunotherapy for bladder cancer at Memorial Sloan Kettering, but is never more than one drink away from a career switch to masked vigilante justice.