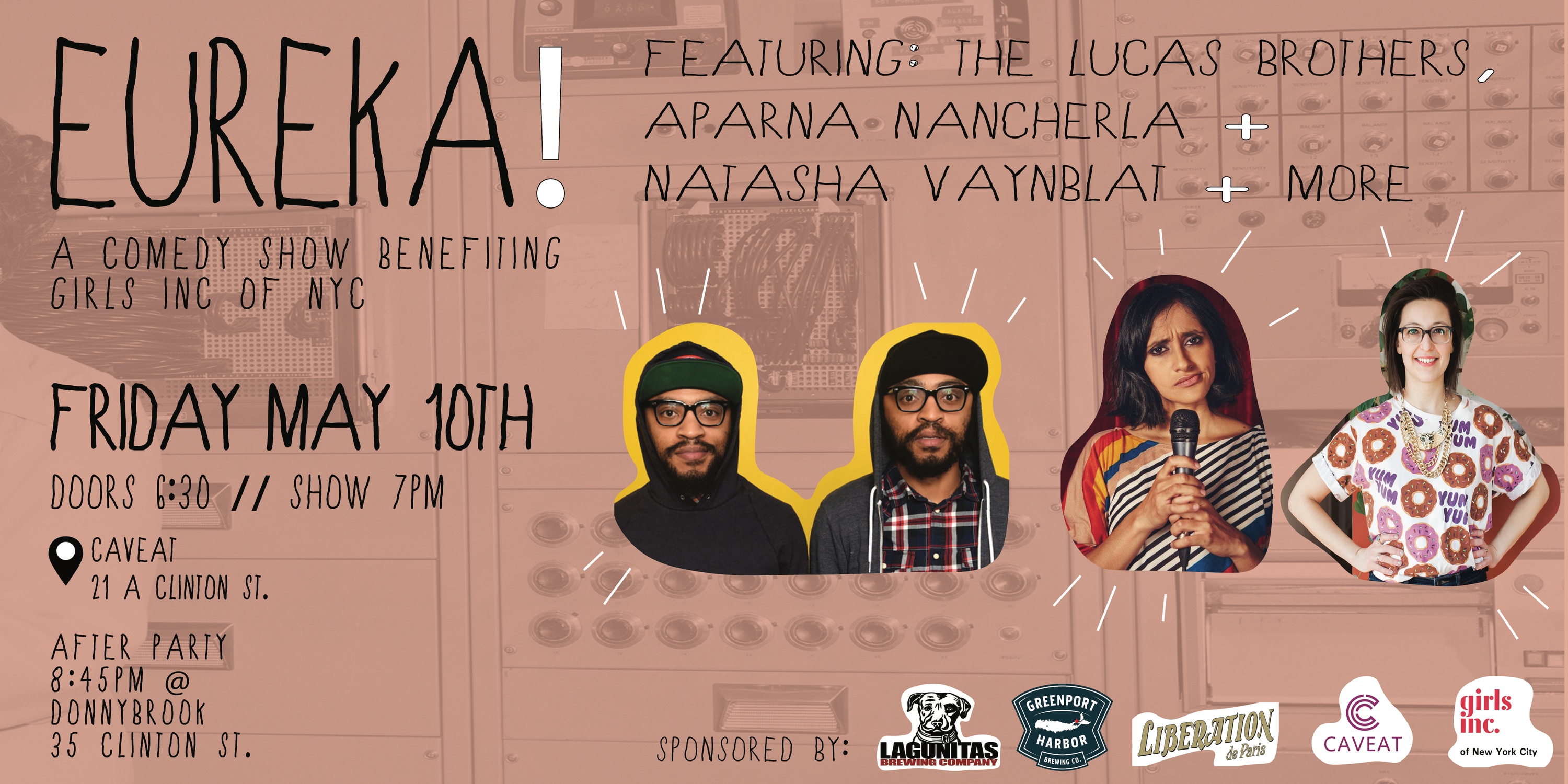 Eureka! is a comedy benefit for Girls Inc. of NYC, which provides underprivileged high school ladies opportunities to pursue kick-ass educations and careers, hosted by Nov10.

Proceeds from the show go directly to funding a program for gifted young women (most of whom are first generation college applicants) to attend STEM programs at universities this summer!

Nov10 is a non-profit, non-partisan community action group of friends based in Brooklyn. We do service projects and have fun. We're not out to solve all the problems of the world. We look for tangible, local actions that can make our community better; then we do them together.

If you can’t attend but want to support, please consider donating!

Doors 6:30 PM, show 7:00 PM.
Tickets $35 in advance, $40 at the door.
21+
This event is mixed seated and standing room. Seats are first-come, first-served.
REFUND POLICY: Tickets may be refunded up to 24 hours before the event. Within 24 hours we may take exchanges for other events at our discretion. No refunds after the event.

Aparna Nancherla
Aparna Nancherla is a comedian and general silly billy. Her sense of humor is dry, existential, and absurd, with notes of uncalled-for whimsy. Think a wine you didn’t order.

You can currently watch Aparna as Grace the belabored HR rep on the Comedy Central show, Corporate.

She also just performed standup on Two Dope Queens on HBO and was the voice of Hollyhock on the most recent season of Bojack Horseman. Other acting credits include Crashing, Master of None, Love, and Inside Amy Schumer. Aparna was also named one of “The 50 Funniest People Right Now” by Rolling Stone. She also co-hosted the 2018 Women’s March Rally in NYC.

The Lucas Brothers
Comedians, actors, and writers, the Lucas Bros (Keith and Kenny Lucas) continue their rise as two of the freshest, most dynamic new faces on the comedy scene. “In a short time….the Lucas Brothers have made a big impact on comedy,” lauds Vulture, and on Tuesday April 18, 2017, the guys’ first hour standup special “The Lucas Bros: On Drugs” premiered on Netflix. Paste Magazine, Complex, Uproxx, and Splitsider voted it as one of the top specials of 2017. They were also recently seen as recurring characters on Season 1 of the hit Netflix series “Lady Dynamite” starring fellow comic Maria Bamford. In 2018, Variety announced that the Bros will co-star in the New Line produced feature film “The Come Up” with fellow comedians Jermaine Fowler (Sorry to Bother You) and Lil Rel Howry (Get Out).

Natasha Vaynblat
Natasha is a Russian-born immigrant who moved to the States when she was seven years old. Before doing comedy full time she was a high school teacher in Brooklyn. Natasha is a stand up/ sketch performer who was named Pure Wow’s “9 of the Funniest Women in NYC Right Now” and Brooklyn magazine named her one of the “100 Brooklyn Influencers.” She’s been a writer for MTV and IFC and her comedic essays have been featured on McSweeney’s, Reductress, and Funny or Die. Natasha was selected to participate in the NBC Late Night Writers Workshop this March and just finished the WGA Made In NY Screenwriting Fellowship. She’s performed at the New York Comedy Festival, Boston’s Women In Comedy, Austin Sketch Fest, Toronto Sketch Fest, SeriesFest, and the New York Television Festival. Natasha loves to wear clothes, check out her weird style @natashawearsclothes.
Pat Regan
Pat is a perennial Lloyd night darling. He famously got his start as a celebrated member of the celebrated all-female Lloyd team Detroit. He has subsequently been on monosyllabic Lloyd teams Witch and Camp, and he now performs with his most diverse Lloyd team yet, Barrymore. Pat acted in the sketch show Yearbook of Revelation which ran at the theater for 6 brave months. Pat Regan is the Lena Dunham of facebook and wants you to follow him on twitter.com where his twitter name is @poregan.