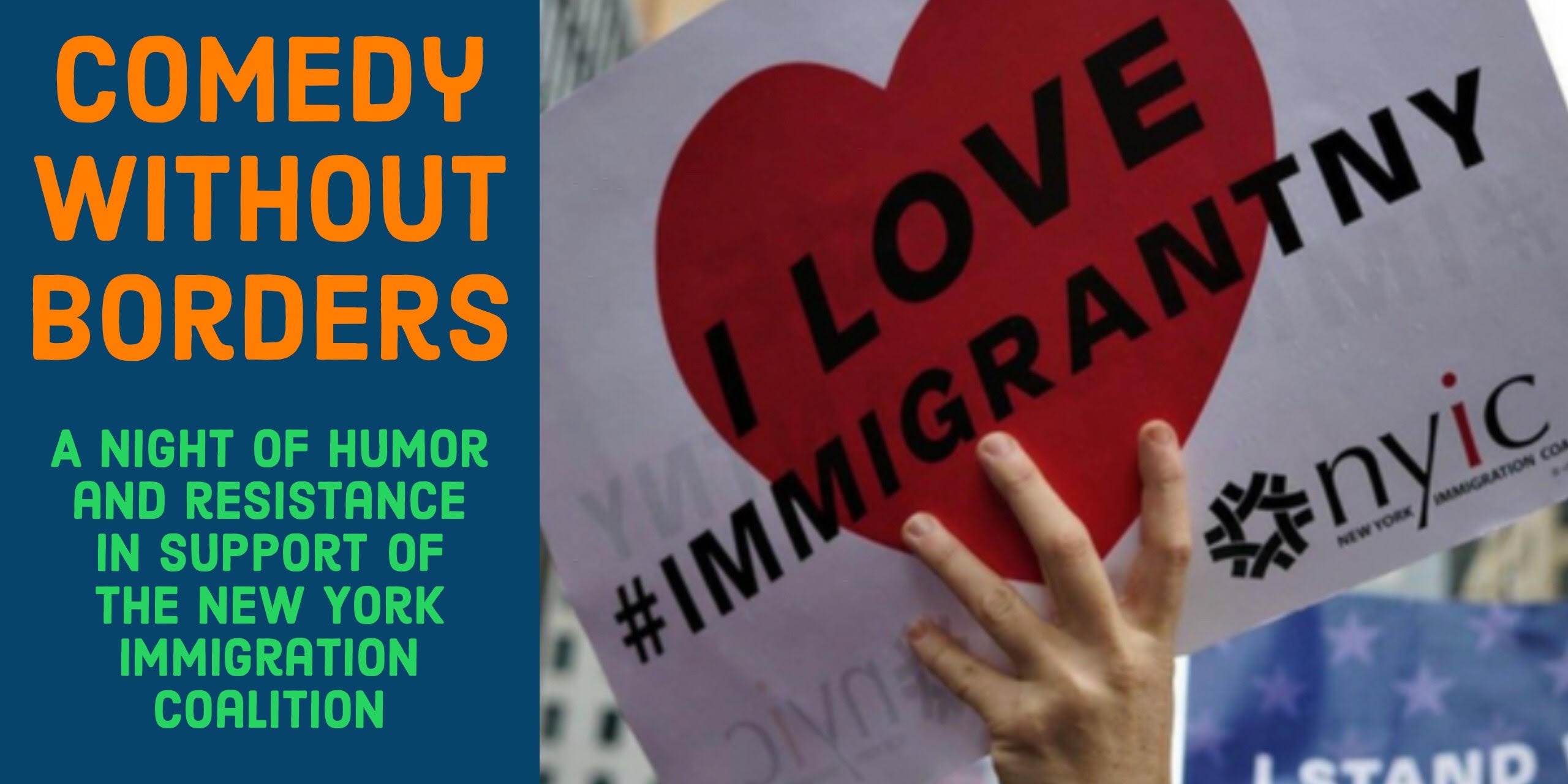 Comedy Without Borders: A night in support of the NYIC

Featuring a line-up of incredible comics from all corners of the globe whose work and humor have been touched by immigration, CWB is a specially curated show in support of the New York Immigration Coalition. Celebrating all that unites, rather than divides, us, CWB is a testament to the power (and necessity) of humor in the face of the politics of fear.

A night of humor and resistance, CWB celebrates and supports our immigrant community at a time when policies and headlines provoke anger, desperation and fear. Our show includes sets from:

Ana Fabrega
A comedian in New York City, Ana Fabrega was included in Vulture’s “38 Comedians You Should and Will Know,” and selected for Just For Laughs’ “New Faces: Characters,” and Comedy Central’s “Comics to Watch.” The New York Times describes Ana as “an inventive performer with a knack for off-kilter characters.”Ana is writing, starring and co-executive producing the upcoming Spanish-language HBO show Los Espookys...
Twitter: @anafabregagood Instagram: @ana_fabrega

Daniel Simonsen
A Norwegian comic and the 2012 Foster's Edinburgh Comedy Award winner for Best Newcomer, Daniel has performed at the Edinburgh Festival Fringe since 2009, was just on Late Night with Seth Meyers, and appeared on Russell Howard's Good News. Since 2014, he has had a recurring role in Vic and Bob's BBC sitcom House of Fools as Erik. Simonsen has won and been nominated for awards both in Norway and the UK including Chortle Best Newcomer, Best Comedian at Comedy Fight Club and the So You Think You're Funny competition.
Twitter: @Daniel_Simonsen

Karina Assad
Having lived all over the United States and being the simple mix of Mexican, Lebanese, French and German- she has a crap ton to talk about! She's been seen on Marcella Arguello's Women Crush Wednesdays at the Hollywood Improv, Put Your Hands Together with Cameron Esposito and Rhea Butcher at UCB Franklin, Good Heroin with Comedy Central’s Matt Ingebretson, and opened for Bill Posley’s Off Broadway One Man Show...
Twitter: @kariassad Instagram: @assadkarirocks

Miriam Moreno
Miriam is a Denver-based comic born in Mexico and is perfect for you if you enjoyed the Disney/Pixar movie Coco but wanted more death. Her background lends a unique voice to comedy, and she has been on High Plains Comedy Festival, Comedy Work’s Funny Final Four Competition and helps run a monthly showcase at Mutiny Information Cafe on the last Saturday of the month.
Twitter: @yung_cabrona

Nonye Brown-West
A Nigerian-American comedian, producer, and writer working theaters, clubs and colleges on the East Coast, Nonye has been featured in the Boston Globe's Rise column as a ”Comic to Watch.” This year she was part of the New York Comedy Festival and she will be part of Treefort Festival later this month...
Twitter: @ThatNonye Instagram: @noneefizzle

Ayo Edebiri
Ayo is a Brooklyn-based writer and performer who has worked for Comedy Central and BET. She’s performed in readings, musicals and improv shows at places like UCB, Union Hall, Dixon Place and Ars Nova. She performs in the sketch group Lo-Fi and has appeared in videos for Refinery29 and Funny or Die.

POSTPONED: Satire and Humor Festival: An Evening of Humorous Readings